Back to the Future: On Eric Adams’s New York

Eight months in, the contours of an Eric Adams mayoralty are gradually emerging. An Adamsite New York—“my city,” in the words of a mayor whose fondness for the first-person possessive has become a calling card—is one that appears poised to reverse even the limited departures from the playbook of the post-fiscal crisis era realized during the de Blasio administration.

Sandcastles: Afghanistan, One Year On

A symbolic twenty years after 9/11, the Biden administration formally ended the United States’ war in Afghanistan, withdrawing the last of its troops from the south-central Asian nation. Melancholy anniversaries serve as reminders of missed opportunities, and this one is no different. Here, however, blunders appear frivolous when compared to the extraordinary corruption and pitiless violence perpetrated by US-backed forces in the region. While much has been made of the shockingly haphazard exit, the ease with which the Taliban seized Kabul, and the grim prospects for women, for girls, and for Afghans who worked with coalition forces, the cardinal sin of the war was not how it ended, but how it began.

By Jarrod Shanahan and Abby Cunniff

A crumbling strip of asphalt winds through the craggy countryside of eastern Kentucky, striated with power lines sagging in every direction. Wobbly pavement markings and errant skidmarks vanish at a hairpin bend buffered by low guard rails framing a rolling, sparsely tree-spotted expanse of hills. On one side of this road stands a roughly chiseled open coal seam, marking the remnants of a former mine. On the other, a bowed chain link fence capped in razor-wire announces the outer periphery of Otter Creek Correctional Facility. This remarkable image by photographer Jill Frank adorns the jacket of prison scholar Judah Schept’s Coal, Cages, Crisis (New York: NYU Press, 2022), confronting the reader with the book’s central preoccupations. 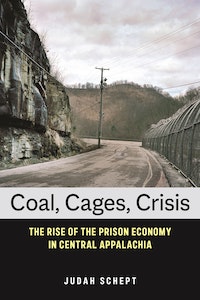 Get notified about upcoming live conversations with artists and when the next issue of the Rail drops.